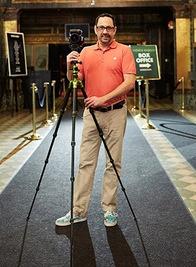 Andrew “Andy” McGibbon’s love of photography began almost 40 years ago when his grandfather gave him his first Canon SLR camera.

For the past 35 years, Andy has been fortunate enough to have worked as a theatrical professional. He has been a production stage manager, general manager, and a digital media pioneer (one of the original creators of Playbill.com). He is also a theatre critic for his own theatrical review website, TheAndyGram.com.

Whether photographing historical American theatres, a newborn baby or the interior of a restaurant, Andy calls on his theatrical experience to bring out the “character” in his subjects.

What Customers Have Said

If you still have questions, please don't hesitate to reach out.